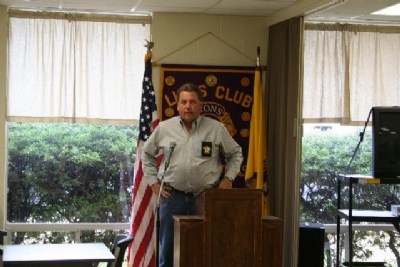 Lions Club Hosts Crime
Stoppers New Coordinator
Lion President Tommy Allbritton rang the bell for 19 Lions and six guests at the regular meeting of the service club Wednesday, April 15. The meeting was held at the Senior Citizens Community Center located at 500 E. Belknap Street in Seymour, Texas.
Lion Cliff Porter gave the invocation. Lion Robert Patterson led the singing accompanied by Lion Billie Gene Young. The dollar was given to Lion Bobby Robertson by Lion Loy “Sparky” Studer for repayment of marrying his daughter.
Lion Bob McWhorter was seen sitting by himself, and one Lion commented, “Well he is sitting with all of his friends.”
Guests included Sharron Warren, guest of Lion Bill Warren; Tammy Billingsley, replacement for Lion Matt Gwinn; and guest speaker, Baylor CountyDeputy Sheriff Billy Henderson of Crime Stoppers. Also attending the meeting were the Lion Sweethearts Bethany Brown, Shelby Winn, and Lanna Sharp.
During the meeting, Lion Robert Patterson spoke about the broom and mop sale. The total was down alittle from last year, given the total $1,490.77. It was considered a success because no one blew away from the high winds that day. The Lions Club appreciates Lion Matt Gwinn at The Baylor County Banner, KSEY, all members who signed up to work during the sale and Lawrence Bros.
The new sweetheart for the coming year was announced and the winner is Whitney Browning.
The Ag Day was alot of fun and everyone had a chance to pick up some information. Visitors included representatives from Kay Bailey Hutchenson’s office. This year marked the 19th year running for the Ag Appreciation Day.
Coming up in May, the Lions Club will be selecting new officers, so don’t forget to make your nominee selection. New officers will take office in July. In June, the Lion’s Club will host their annual banquet. This will be the last event for the year for the current officers.
Lion Bill Warren introduced special speaker Deputy Sheriff Billy Henderson of Crime Stoppers.
Deputy Sheriff Hernderson retired from the Wichita Falls Police Department in 2004 after 25 years of service.  His professional qualifications include: 2½ years in the Criminal Investigation Section (Felony Property Crimes, Misdemeanor, and Juvenile section); 16 years Rescue and Recovery Scuba Dive Team; obtained Master Peace Officer Certification from TCLEOSE in 1998; Officer of the Year in 1992 with the Wichita Falls Police Officers Association; Officer of the Year 1992 - CLEAT (Combined Law Enforcement Associations of Texas) Region 5; President of Wichita Falls Police Officers Association from 1992-1996; and CLEAT Regional Director from 1997 to 2002. From January 2005 to December 2008, he was the administration Lieutenant with the Hood County Sheriff Office. His duties included Hood County Crime Stoppers Coordinator, Crime Watch Program Director and Sex Offenders Registration.
Crime Stoppers was created in Albuquerque, New Mexico when a young college student, Michael Carmen, was shot to death during a robbery at a gas station in Albuquerque in July 1979. Detective Greg MacAleese had no idea who was responsible for the killing. No witnesses came forward and it appeared that the killing would remain a mystery. But Detective MacAleese had worked at a newspaper before joining the police department and knew that it would be necessary to encourage the public to get involved and help solve the murder.
He conceived the idea of producing a video re-enactment of the homicide, hoping that someone would see the video and call him with details. He had even put up a reward from his own pocket to encourage someone to provide a lead.
His plan worked only after a few hours after the recreation of the murder was broadcast on the television station KOAT, he received a phone call. Within 72 hours, two men were arrested and charged with the murder of Carmen and a string of armed robberies.
The Crime Stoppers Program is a three part approach to solving the crime problems. The three steps are: the phone call, tips online, and structure and funding of Crime Stoppers.
Phone calls are received at the Baylor County Crime Stoppers tips phone line. This phone stands alone and does not provide caller ID, and conversations are not recorded. After receiving a phone call, the information is passed on to the investigating officer. Calls are then publicized in the newspaper and radio as “Crime of the Week”. The caller is anonymous.
The Online WebTip is another option of giving the department tips. It is completely secure and anonymous and is a very effective and efficient means of safely communicating with the police department. You can visit the website at www.889tips.com. The unique integrated two-way dialog allows the tipster to come back and provide additional information to their tip at any time, but also provides a secure means for the coordinator to ask questions or provide reward information back to the tipster through the same secure and encrypted interface.
The structure and funding of Crime Stoppers is completely a non-profit organization (Charity). It is funded by private donations and fundraising. NO TAX DOLLARS are involved. The size of a rewards can be paid up to $1,000 for tips on crimes of the week.
Crime Stoppers does work. It has and can lead to arrests and recovery of substantial amounts of property. Calls have included information about murder, robbery, rape, assaults, drug and firearm offenses.
The Baylor County Crime Stoppers Program is beginning a new era from the efforts of the Baylor County Sheriff’s Office and the Seymour Police Department. The program operates as an independent organization. This is an effective tool to fight crime in the area.
Deputy Billy Henderson is the coordinator and Carl Porter is president. For more information about the Baylor County Crime Stoppers Program, you can visit www.889tips.com.
The next Lions Club meeting will be Wednesday, May 6 at 12 noon with Brad Golden as special speaker.